Shopping Cart
Your Cart is Empty
Quantity:
Subtotal
Taxes
Shipping
Total
There was an error with PayPalClick here to try again

Thank you for your business!You should be receiving an order confirmation from Paypal shortly.Exit Shopping Cart

Funk is a music genre that originated in the mid-late 1960s when African American musicians blended soul music, soul jazz and R&B into a rhythmic, danceable new form of music. Funk de-emphasizes melody and harmony and brings a strong rhythmic groove of electric bass and drums to the foreground. Funk songs are often based on an extended vamp on a single chord, distinguishing it from R&B and soul songs centered around chord progressions.

Like much African-inspired music, funk typically consists of a complex groove with rhythm instruments such as electric guitar, electric bass, Hammond organ, and drums playing interlocking rhythms. Funk bands sometimes have a horn section of several saxophones, trumpets, and in some cases, a trombone, which plays rhythmic "hits".

Many of the most famous bands in the genre also played disco and soul extensively. Funk music was a major influence on the development of disco music and afrobeat, and funk samples have been used extensively in genres including hip hop, house music and drum and bass. It is also the main influence of go-go, a subgenre associated with funk. 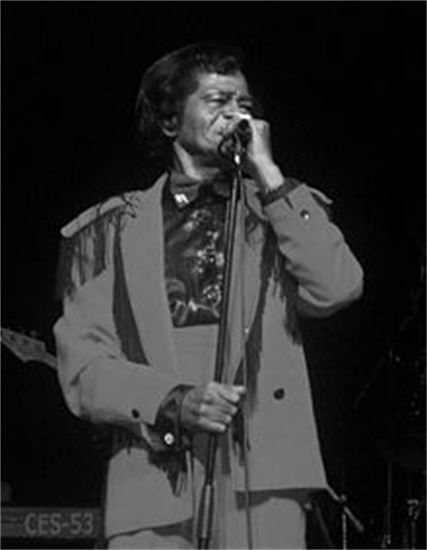 The word funk basically refers to a strong, generally offensive odor. The anthropologist/art historian Robert Farris Thompson, in his work Flash Of The Spirit: African & Afro-American Art & Philosophy, funky has its semantic roots in the Kikongo word "lu-fuki", which means "bad body odor". He says: "Both jazzmen and Bakongo use funky and lu-fuki to praise persons for the integrity of their art, for having 'worked out' to achieve their aims ... This Kongo sign of exertion is identified with the irradiation of positive energy of a person. Hence 'funk' in American jazz parlance can mean earthiness, a return

James Brown,one of the founding fathers of funk.

By the mid-1960s, James Brown had developed his signature groove that emphasized the downbeat – with heavy emphasis on the first beat of every measure to etch his distinctive sound, rather than the backbeat that typified African American music. Brown often cued his band with the command "On the one!," changing the percussion emphasis/accent from the one-two-three-four backbeat of traditional soul music to the one-two-three-four downbeat – but with an even-note syncopated guitar rhythm (on quarter notes two and four) featuring a hard-driving, repetitive brassy swing. This one-three beat launched the shift in Brown's signature music style, starting with his 1964 hit single, "Out of Sight" and his 1965 hit, "Papa's Got a Brand New Bag".

Brown's innovations pushed the funk music style further to the forefront with releases such as "Cold Sweat" (1967), "Mother Popcorn" (1969) and "Get Up (I Feel Like Being A) Sex Machine" (1970), discarding even the twelve-bar blues featured in his earlier music. Instead, Brown's music was overlaid with "catchy, anthemic vocals" based on "extensive vamps" in which he also used his voice as "a percussive instrument with frequent rhythmic grunts and with rhythm-section patterns ... [resembling] West African polyrhythms" -- a tradition evident in African American work songs and chants. Throughout his career, Brown's frenzied vocals, frequently punctuated with screams and grunts, channeled the "ecstatic ambiance of the black church" in a secular context.

In a 1990 interview, Brown offered his reason for switching the rhythm of his music: "I changed from the upbeat to the downbeat.... Simple as that, really." According to Maceo Parker, Brown's former saxophonist, playing on the downbeat was at first hard for him and took some getting used to. Reflecting back to his early days with Brown's band, Parker reported that he had difficulty playing "on the one" during solo performances, since he was used to hearing and playing with the accent on the second beat.

to fundamentals." African-American jazz musicians originally applied the term to music with a slow, mellow groove, then later with a hard-driving, insistent rhythm, as it implies a bodily or carnal quality. This early form of the music set the pattern for later musicians.

The music was slow, sexy, loose, riff-oriented and danceable. Funky typically described these qualities rather than a distinct genre. In early jam sessions, musicians would encourage one another to "get down" by telling one another, "Now, put some stank on it!". It is possible that the word funk was derived from a blend of the Kikongo term lu-Fuki (preserved by the African American community) and the English term stank and stinky. At least as early as 1907, jazz songs carried titles such as "Funky Butt", a piece by Buddy Bolden. As late as the 1950s and early 1960s, when "funk" and "funky" were used increasingly in the context of Soul music, the terms still were considered indelicate and inappropriate for use in polite company. According to one source, New Orleans-born drummer Earl Palmer "was the first to use the word 'funky' to explain to other musicians that their music should be made more syncopated and danceable."